While a research assistant at the Space Environment Center in Boulder, Colorado, I wrote a program that would create 3D images and animations of models of CMEs (Coronal Mass Ejections) from the sun.

The main program, Adrastea, was designed to create 3D visualizations of density, velocity, temperature and magnetic field data. This data came from a model of space weather in the area between the Sun's corona and just beyond Earth (sometimes farther). 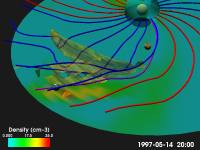 The model's main purpose was to simulate CMEs that hit Earth. The data included the temperature, velocity and density of solar wind particles along with the magnetic field magnitude and direction. The program is capable of showing horizontal, vertical and spherical cuts as well as isocontours (good for showing the CME). The magnetic field data can be used to create arrows showing magnitude and direction of the magnetic field on the cuts. The program is also capable of showing magnetic field lines coming from the sun in a preset pattern or on spots clicked on by the user. Spacecraft data can be used for comparison by changing the color and size of the sphere representing Earth. Also viewpoints can be saved as well as all the settings for future use. To speed loading for test runs, settings were added so that the program would only load part of a data file. Finally the program is capable of batch processing a series of data files, each of which is the model at one point in time to create an animation.

Other programs were created to handle file format and data conversion and with other data analysis tools. Several libraries were used including OrbitTools (one I previously created), Jama (from NIST), NetCDF (for handling the NetCDF file format from UCAR), JFreeChart and the Visualization Tool Kit (VTK). VTK is used to create the actual renderings. All the programs were written in Java so they could be used on both Linux and Windows computers.

The programs were named after the smaller moons of Jupiter. This was before the Europa project and I did not know I would be working on one of Jupiter's main moons in the future.

Earth is about to be hit by a CME.
Make you feel small, doesn't it? 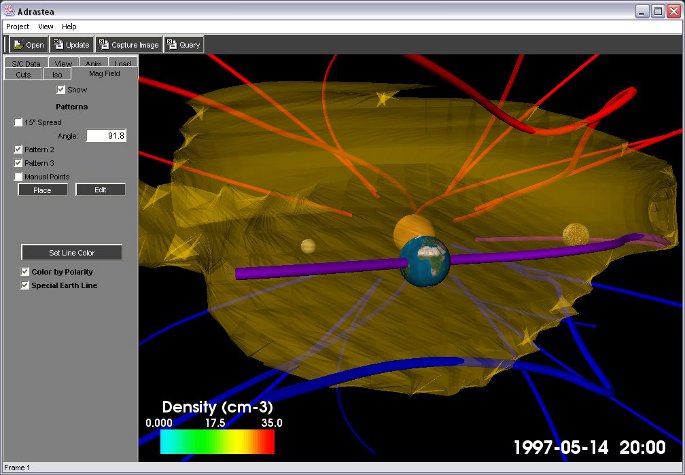 Vertical and Spherical Cuts and Grid
with the Magnetic Field Lines 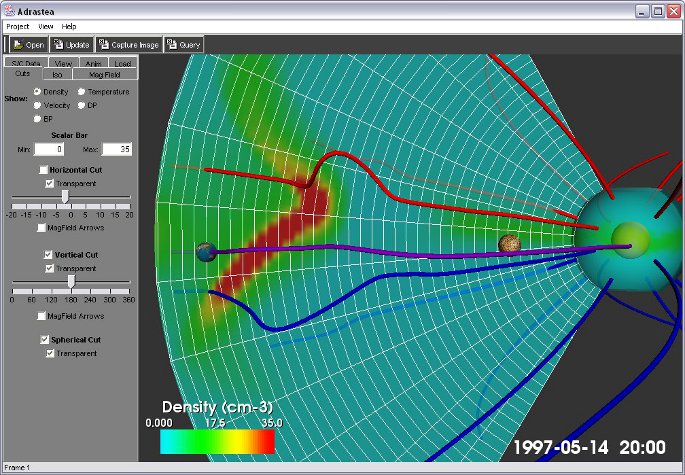 Other Programs I Wrote for this Project